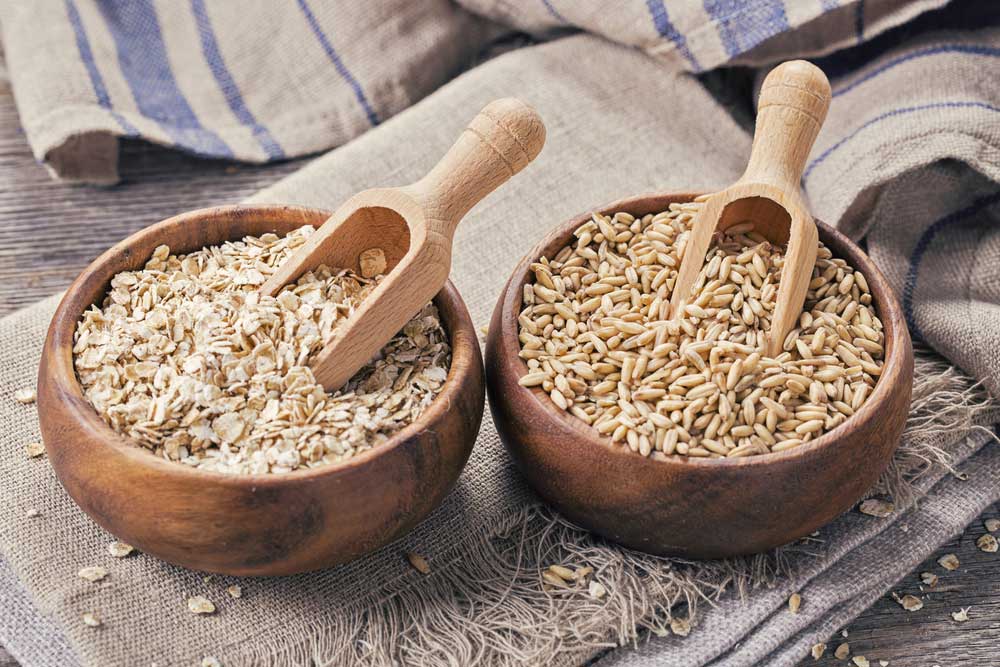 Oat bran has been my BRAN of choice for over 30 years! My standard breakfast comprises half a cup of it , half a cup of muesli, diced fresh fruit and either rice milk or oat milk. Food fit for a king! A source of great energy, health, vigour and endurance, and it keeps me going at full speed for at least 5 hours!

What is Oat Bran?

It is the edible, outermost layer of the oat kernel. Oats have been recognized as a food and an herb. Like oatmeal, it contains B complex vitamins, protein, fat, minerals, and heart healthy soluble fiber. When eaten regularly, oatmeal and oat bran may help to lower total cholesterol levels by 25 or more within a very short time period (one to three months). In addition, oat bran can help to reduce the bad LDL and raise levels of good HDL cholesterol.

Oat bran is rich in a soluble fiber called beta-glucan. Several trials have shown that oat bran supplementation can significantly lower cholesterol levels in people with elevated cholesterol, but only slightly in people with healthy cholesterol levels. Breads containing oat bran may, therefore, be beneficial at lowering elevated cholesterol. Prior to commencing the use of this wonder food my cholesterol was very high, but within 2 years it was reduced to a very safe level. and has stayed there. One very important point about OAT BRAN is how kind it is to one’s digestive system – when I first tried wheat bran it caused bloating and very acid stomach, but the OAT BRAN has never been anything but very kind.. 30 years and no discomfort…YIPPEE!

Soluble fibre from oats lowers cholesterol levels in the blood. Consuming 3 g of soluble fiber from oat products per day (provided by three 28 g servings of oatmeal or one large bowl of oat bran cereal) has been shown to decrease total cholesterol by approximately 1.8. It is estimated that a 1 reduction in total cholesterol could lower the incidence of coronary heart disease by around 2. Some studies suggest that oat consumption may reduce blood pressure.

Preliminary studies suggest that beta-glucan from oats may enhance the immune response. Further research is required to investigate the potential immune-boosting effects of oats however.

What is the Difference between Oat Bran and Wheat Bran?

Wheat and oats are cereals but their grains are rather different. Both contain a germ and a large amount of starch. The starch provides the energy reserve for the germ as it sprouts to produce a new plant. The starch reserve is called the endosperm which we use for energy when we eat oat porridge, muesli, or the flour from wheat. Oat grain differs from wheat in that it contains about twice as much polyunsaturated fat. The most noticeable difference is in the outer coat and in the fibre of the grains. Wheat contains a layer of cells called the aleurone which separate the seed coat from the endosperm. During milling, the aleurone and the seed coat are broken apart and very little starch remains. In oats, the aleurone layer contains much more water-soluble fibre and the cells reach down into the endosperm. During milling the oat bran that separates contains aleurone cells, seed coats and starch. Wheat bran is a very good source of dietary fibre as it is not soluble in water. This gives wheat bran its main beneficial action of being a good (and cheap) laxative – because the fibre increases the mass of the stools.

How things have changed! The ancient Greeks and Romans celebrated the laxative and satiety value of OAT BRAN and wholemeal breads, but a century ago, fibre in the diet was thought to be harmful to the body. It was believed to interfere with the absorption of essential nutrients from food and also increase bacteria in the bowel, so nutritional thinking in those times dictated the total removal of the bran and the germ of grains. As a consequence, for over 100 years we were a sluggish bowelled and constipated race

It is important to realize that one food product in the diet cannot be expected to create optimum health or lower cholesterol levels by itself. Consumers must also reduce the intake of their total and saturated fats. The value of porridge or muesli for breakfast is improved if it replaces more fatty food.

This website uses cookies to improve your experience while you navigate through the website. Out of these cookies, the cookies that are categorized as necessary are stored on your browser as they are essential for the working of basic functionalities of the website. We also use third-party cookies that help us analyze and understand how you use this website. These cookies will be stored in your browser only with your consent. You also have the option to opt-out of these cookies. But opting out of some of these cookies may have an effect on your browsing experience.
Necessary Always Enabled
Necessary cookies are absolutely essential for the website to function properly. This category only includes cookies that ensures basic functionalities and security features of the website. These cookies do not store any personal information.
Non-necessary
Any cookies that may not be particularly necessary for the website to function and is used specifically to collect user personal data via analytics, ads, other embedded contents are termed as non-necessary cookies. It is mandatory to procure user consent prior to running these cookies on your website.
SAVE & ACCEPT